1. Connections between sea level and groundwater: the missing link

About two-thirds of the world's largest cities are located in coastal areas less than 9.1 m above sea level. Estimates of sea levels by the Intergovernmental Panel on Climate Change (IPCC) suggest 0.52 to 0.98 m of sea-level rise during the 21st century. The IPCC considers groundwater changes to be small and compensated for by other contributions to sea-level rise. The estimation is rooted in modeling of sea levels in the present day icehouse. However, the causes of 10^4-10^5-year scale, large (> 75 m) sea-level changes in greenhouse eras lacking ice sheets, e.g., during the Triassic Period 250 million years ago, remain a mystery, challenging current models of sea-level change. To address this mystery, I developed a novel sedimentary noise model for sea levels and found that water mass ‘see-sawed’ between ocean and groundwater in the Triassic (Li et al., 2018 Nature Communications). This finding indicates long-term, large water exchange between ocean and land forced by Earth’s obliquity forcing is a missing link for reconciling geological records and models for sea-level change in greenhouse eras. Thus, as present-day Earth continues toward both warmer climate and lower obliquity angles, changes in groundwater should be reassessed in projections of global sea-level.

Image: an artist's rendering of a coastal ocean landscape in the Early Triassic world 250 million years ago. Credit: Hewei Duan

The geologic timescale is a common language used by geologists, paleontologists, and other geoscientists to describe the timing and relationships of geological events. Unfortunately, the resolution of most traditional chronologies is on the order of a million years. Studies of Milankovitch cycles recorded in sediments have led to the rise of astrochronology. Astrochronology is the only method that provides continuous and high-resolution timescale (as low as thousand-year resolution) in deep time, representing a key step toward the ultimate goal of a high-precision timescale. 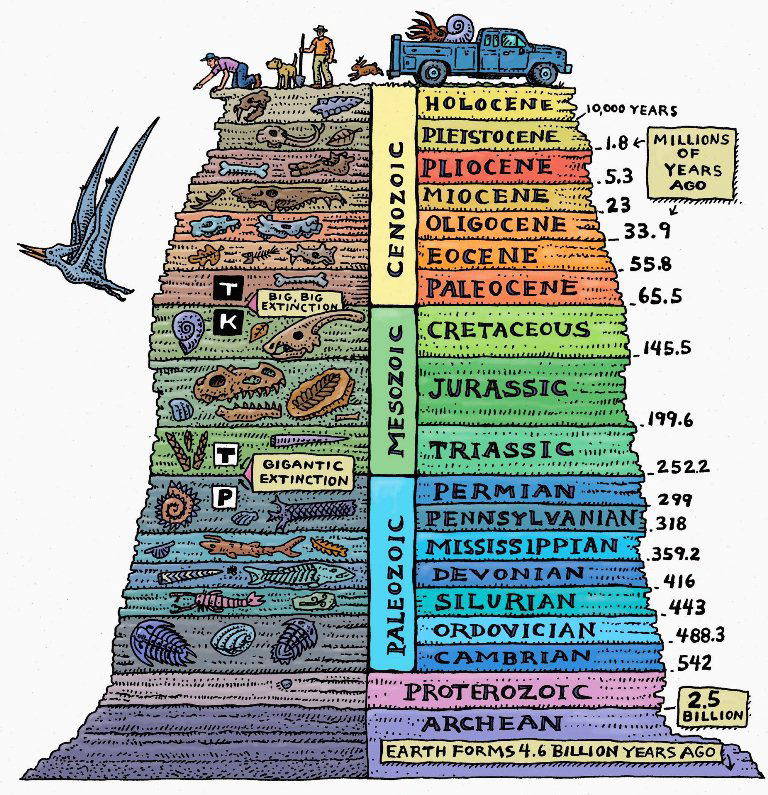 I have developed an astrochronology for the Triassic in South China, Italy, Germanic Basin and Newark Basin. This astrochronology provides a high-resolution timescale for studying carbon-cycle perturbations, biodiversity changes, and sea levels covering a variety of striking global warming events.

Induan and Olenekian Ages (Early Triassic) (251.9- 246.8 Ma): Astronomical-cycle tuning of spectral gamma-ray logs from marine sections at Meishan, Chaohu, Daxiakou and Guandao in South China yields an integrated timescale for the Early Triassic, which is consistent with scaling of magnetostratigraphy from climatic cycles in continental deposits of the Germanic Basin (Li et al., 2016 EPSL). Th age of the Early Triassic substages has been cited by A Concise Geologic Time Scale 2016 as a global reference.

This study leads to 10+ news in China. 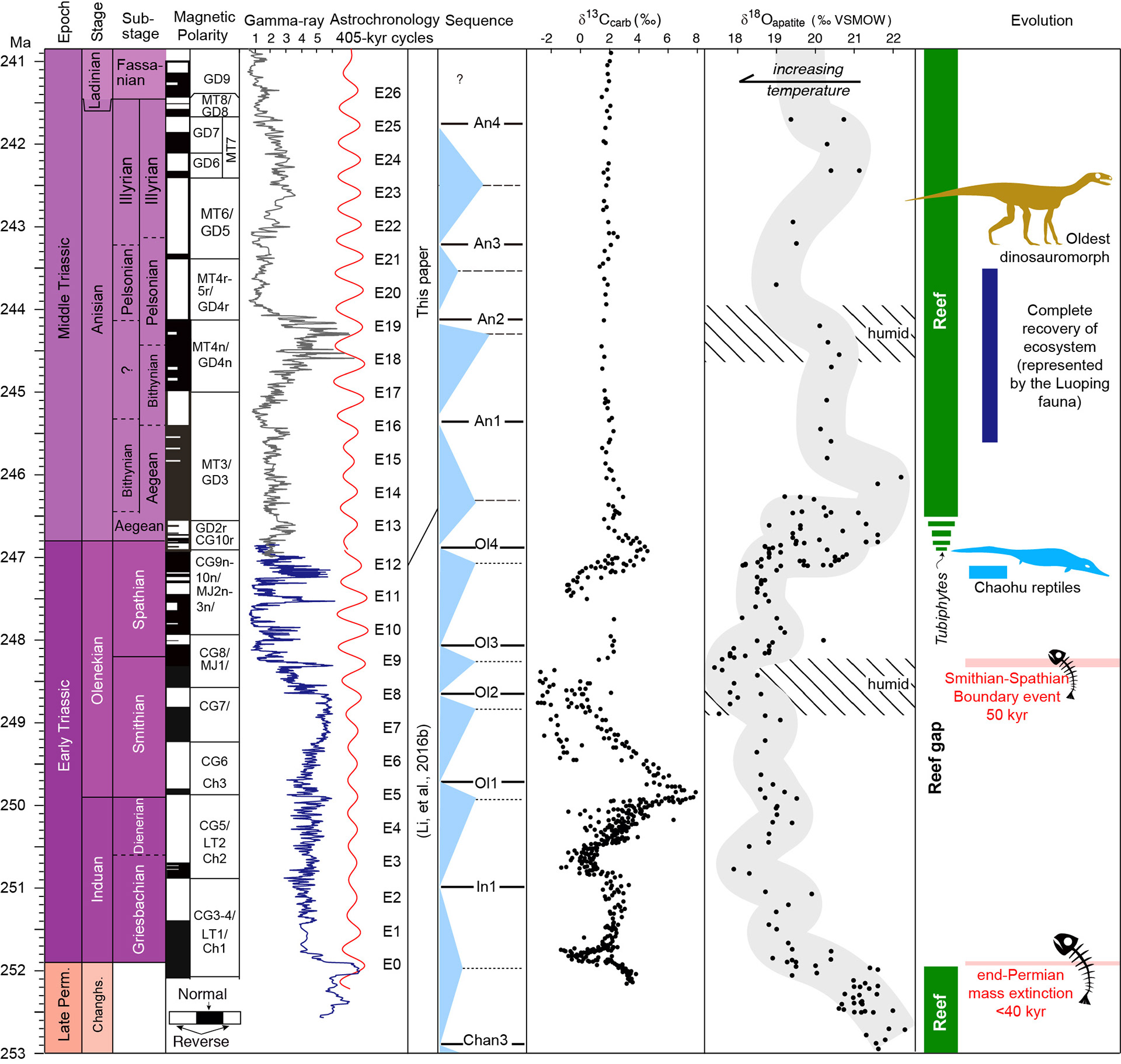 Carnian Age (Late Triassic) (237.0-228.4 Ma): Cyclostratigraphy derived from GR curves was combined with magnetostratigraphy of two sections in Guizhou Province and one location in Sichuan Province. The magnetostratigraphy of all sections are consistent with the cyclicity and characteristic GR features, thereby enabling a cycle-tuned magnetic polarity scale spanning ~ 2.4 myr (Fig. 2). This magnetostratigraphic correlation implies that the termination of the Yangtze Platform is coeval with the beginning of the mid-Carnian Pluvial Event. The cycle-scaled magnetic-polarity time scale supports the “Short-Tuvalian/Long-Norian” age model of the Late Triassic. (Zhang, et al., 2015, Palaeo3).

Rhaetian Age (Late Triassic) (205.5-201.4 Ma): The Newark Supergroup-based astrochronology and geomagnetic polarity time scale (APTS) provides a basis for the Late Triassic timescale. However, the Newark-APTS has been continuously challenged regarding its age and completeness. We provide a new 6.5 million years (Myr) long Xujiahe-APTS for the lacustrine-fluvial Xujiahe Formation at Xujiahe, Qilixia, and Tanba sections in Sichuan Basin, South China aiming to provide an integrated time scale for the Late Triassic. Cycle tuned magnetostratigraphy of the Xujiahe Formation in South China correlates well with the Newark APTS of North America. (Li et al., 2017 EPSL).

This study leads to 100+ news reports in China.

3. Mechanisms for paleoclimate change in a greenhouse world 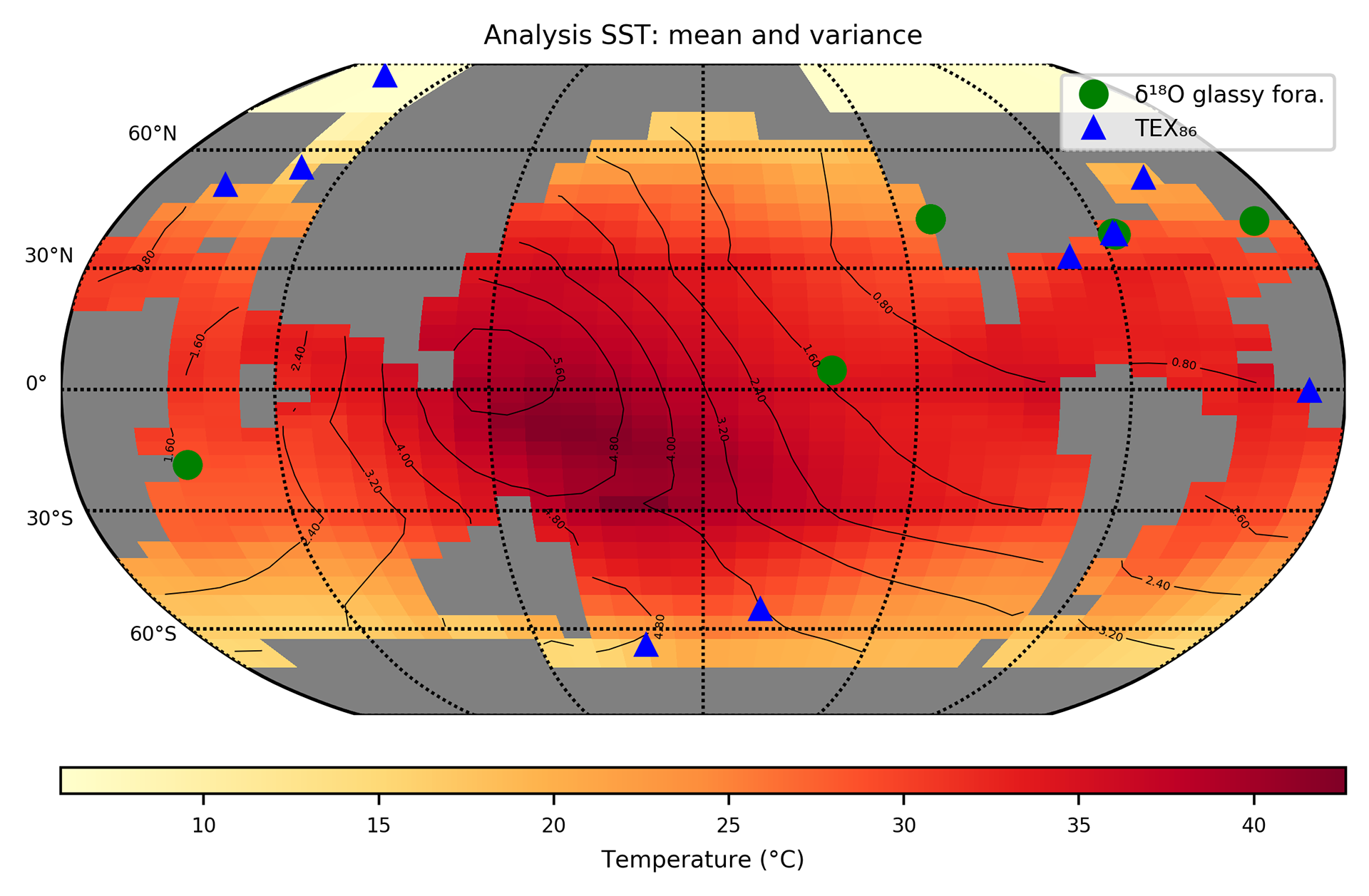 Obliquity-forced climate during the Early Triassic hothouse: The recent geochronologic evidence constraining the latest age of the Siberian Traps to 0.5 m.y. following the end-Permian mass extinction makes it unlikely that volcanism drove the unusual global dynamism of the Early Triassic, as currently widely thought.

This study leads to 30+ news in China. 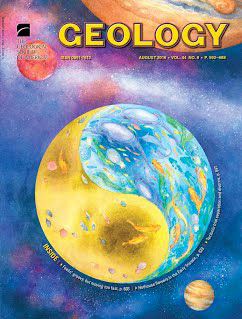 Astronomical forced climate change during the Oligocene-Miocene transition: The Oligocene-Miocene transition period was characterized by a decrease in global CO2 levels, expansion of polar ice sheet, fall in global sea-level, etc. Power spectra of the L* series at ODP Site 926 showed that the long eccentricity signals became significantly weak, while the obliquity signals became strong, from the Late Oligocene to the Early Miocene. The 405 kyr long eccentricity minimum coincided with the 1.2 Myr obliquity node at the OMB, and similar convergences might be closely related to other extreme-cold events in Earth’s history. (Zou, et al., 2016).